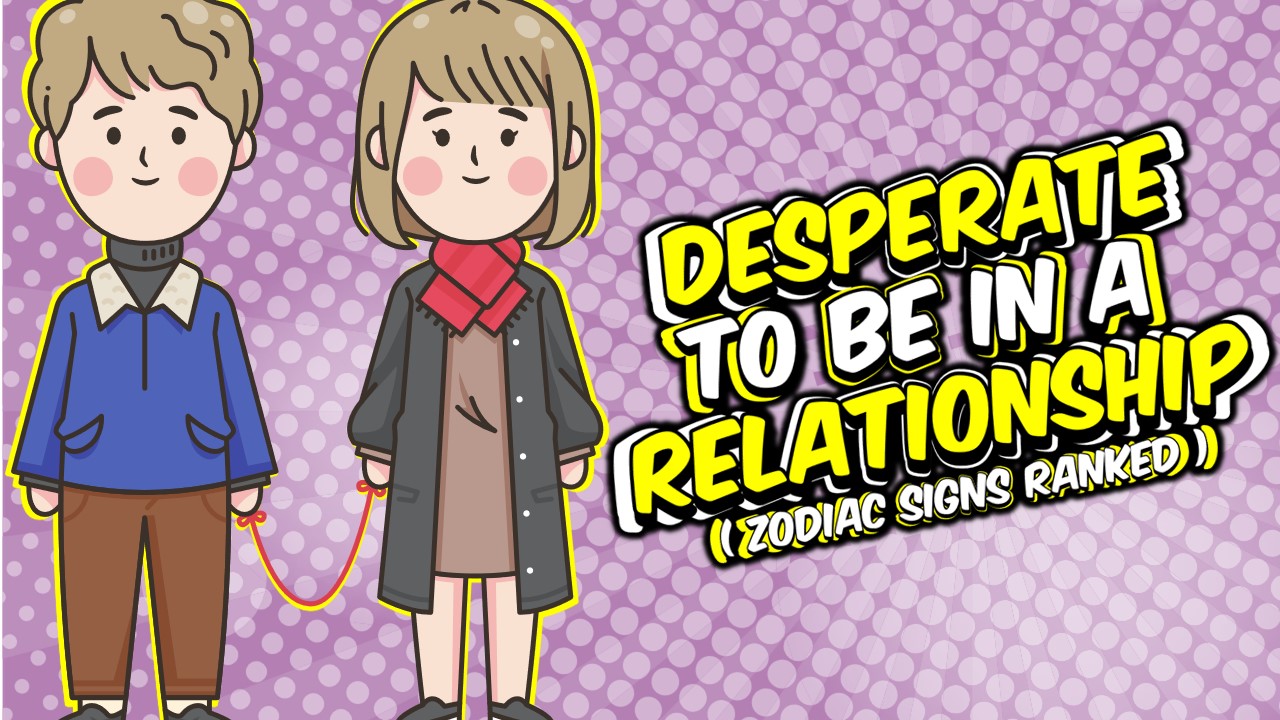 Romantic relationships are often portrayed as the be-all and end-all of personal relationships. There are the heroine’s goal, the reward of every hero, and the thing we’ve been told since childhood will make our life complete.

Whether this is true or a complete lie depends entirely on every one of us, but some zodiac signs are more likely to believe in this than others.

Here are the zodiac signs, ranked from the most desperate to be in a relationship to the least.

Geminis are desperate to be in a relationship because they’re convinced it would solve all of their problems.

This sign is full of self-doubt and overthinking, particularly when it comes to a relationship.

Cancers are romantic by nature and often make their families and loved ones the center of their world.

They hate being single. They want to love and be loved, and when they’re not in a relationship, they feel like something is missing from their lives.

Cancers are one of the least likely signs to blindly jump into a relationship, though, so that feeling of emptiness can last for a while.

Taurus are big fans of long-term relationships, which means they feel alone if they’re not in a serious relationship.

Generally speaking, they don’t mind being alone, knowing dating the wrong person is much, much worse, but the longer they are without a relationship, the more likely they’ll be to grow nervous, and the older the Taurus is, the worse this gets.

Another sign for whom relationships play a big part in their identity, Scorpios feel like they’re failing if they don’t have the perfect partner by their side.

Their ambitious nature pushes them to want more and more, and while that’s usually channeled towards their careers and their hobbies, it reflects in their relationships just as much.

Scorpios are desperate to get in a relationship because it’s the piece that’s missing to paint that successful, picture-perfect image of themselves they so want to show the world.

Leos are fiercely independent and don’t actually need to be in a relationship nearly as much as other signs in this list; however, they love being admired and adored, and that pushes them to look for a partner.

They’re not on the lookout for someone to share their lives with or someone to build a life with; they’re looking for life-long fans and people who will look up to them.

Virgos want a relationship because they dislike being alone. Deep down, they’re family people, and they want the opportunity to share their lives with others.

Too often, Virgo is afraid of relationships and the pain they can bring. They’re also a little too demanding and perfectionist, and likely to overlook a good thing because it doesn’t look like the picture-perfect relationship they imagined for themselves.

They’re just as desperate to be in a relationship as some of the previous signs, but their hesitance and fear make them appear more controlled.

You’d imagine the romantic Pisces would be higher in this list, but the truth is that they’re not in any rush as far as relationships go.

Yes, they want to be in one, but their romanticism prevents them from enjoying casual dating and one-night-stands, which means they’d rather take their time meeting the right person.

Pisces loves the dating stage of a relationship and treasures the opportunity to get to know their partner, and that’s what stops them from coming off as too desperate to be in a relationship.

Libras love being in love and adore all the fuzzy feelings being in a relationship gives them, so they’re not really in a rush to commit fully into a long-haul relationship.

They’d love to be in one, sure, but while that happens, they don’t mind casual dating and hookups.

Once they meet ‘the right one’ they’ll commit, but in the meantime, what’s the point on feeling desperate for a relationship when you can just have fun?

Sagittarians are very ambivalent towards relationships, so they don’t feel any sort of push to be in one.

If the opportunity to form a romantic relationship appears, they’ll take it, but they’ll be just as content with their lives if it doesn’t.

As long as they have their friends and their hobbies, Sagittarians won’t look for a relationship with nearly as much zeal as other zodiac signs.

Aries love fiercely and passionately, but they don’t need to love other people to feel complete.

They can love their pets, their adventures, hobbies, collections, careers, etc.

Sure, if they’re ever in a relationship, they’ll be amazing lovers, committing to it mind and soul, but they won’t’ sweat being single, and in fact, might prefer it sometimes.

Capricorns tend to have a very skeptical attitude towards romantic relationships, which prevents them from looking for them, never mind being desperate to be in one.

They’d rather dedicate their time to their careers and hobbies.

Sure, they might end up in a relationship at some point, but it’s usually because other people lulled them into it, and rarely because they went looking for one.

If love happens to Aquarius, that’s fantastic. If it doesn’t, that’s just fine.

Their independent personalities and somewhat detached approach to all kinds of relationships means they won’t pursue romance until they feel like it’s the right time to do it.

They often see romantic relationships not as a goal but rather as a hurdle and will postpone them until they feel like they’re ready to be in one.