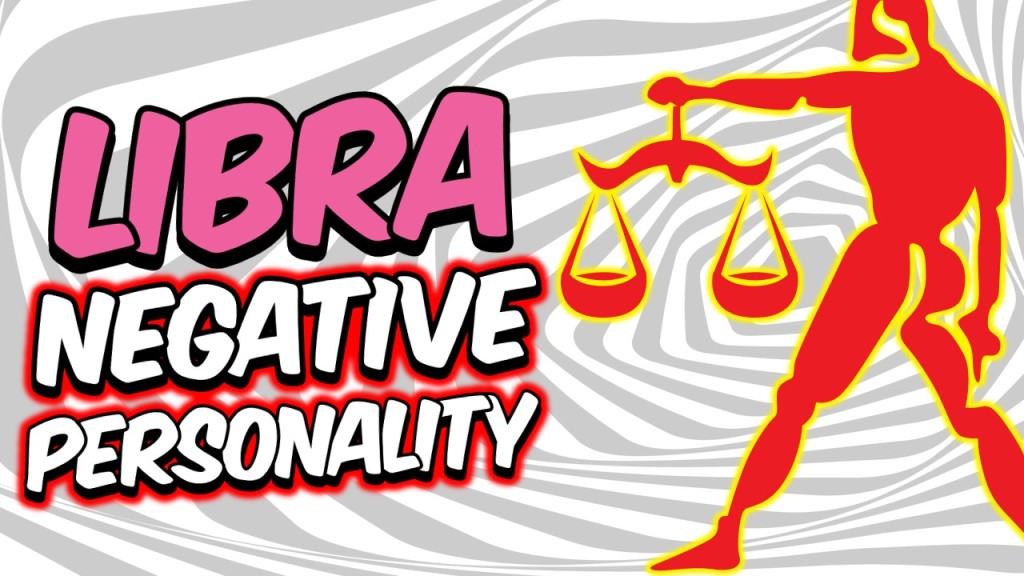 Libras are, without a doubt, one of the most positive signs in the zodiac. They’re creative and expressive individuals who lean towards peacemaking and attempt to get along with everyone in their lives.

Because of their positive and friendly attitudes, most people tend to have nothing but good things to say about Libras, and the most they can criticize about them is that they’re not very good at making choices.

However, there’s much more to Libra than what meets the eye.

Represented by the scales, Libra’s whole thing is balance, so it stands to reason that they have both positive and negative personality traits.

Under that happy-go-lucky exterior lurks a dark side not everyone is privy to, but anyone who’s ever been close to a Libra can verify.

Here are the 5 negative personality traits of Libra.

Though they understand the importance of trust and feel very touched when you confide in them, Libras love to gossip, and they can rarely manage to keep secrets to themselves.

Though they don’t usually spread rumors or share secrets to hurt people, most people don’t like to have their secrets shared with the rest of the world, so if you want a secret kept, it’s best not to share it with Libra.

We say usually because when they feel slighted or betrayed, Libras have no problem weaponizing all the information you’ve shared with them and using them to destroy you, though we’ll talk about their vindictive streak later.

Suffice it to say, Libras are terrible gossips and often share juicy even when they know damn well they shouldn’t.

Of course, they’ll ask other people not to share the news because they don’t actually want the information to spread. They just want to talk about the subject at hand.

If Libra could, they’d erase the memories of those they gossiped to in order to preserve your secret once they’ve talked about it, but since that option isn’t available, it’s best not to ask secrecy from Libra.

Like Gemini, who’s also represented by two halves, Libras can be terribly indecisive, a trait that drives them (and everyone around them) absolutely mad.

In their quest for balance and inner peace, Libras are likely to overanalyze every aspect of their existence, coming up with pros and cons to their future choices to guarantee they have a better outcome.

While Libras aren’t necessarily prone to overthinking, they’re not ones to choose quickly either and will often drag their feet when it comes to making an important choice.

Despite their balanced ideals, Libras are flighty and can change moods very quickly, which only makes choosing harder.

What they choose one moment can be the opposite of what they wanted the next, so those who want to hang out with Libra should be prepared to see them change their minds over and over again.

Though they have a goodie-two-shoes reputation, the truth is that, once slighted, Libra can easily become the most vindictive sign in the entire zodiac.

They treasure peace and pursue it above all else, certainly, and that’s precisely what makes them so vicious when it comes to getting vengeance: If you consistently take away the thing they like the most, they’ll go after you without thinking it.

While they’re usually not particularly confrontational and they prefer to act as a peacekeeper, they know one or two dirty tricks that they’ll use without remorse if they feel like the other person deserves it.

What’s worse, since they’re the last person anyone would suspect, they’re perfectly capable of getting away with their cold-blooded revenge.

In fact, when you think about it, it’s not that surprising that Libras are so ‘gung ho’ about revenge. Their whole thing is balance, after all.

If you hurt them, expect them to hurt you back.

While Libra’s love for peace and tranquility can lead them to lash out when someone threatens it, it can also push them to be manipulative control freaks.

They want things to be comfortable and predictable. They want to live quietly without fights and arguments; They want everyone to get along and not drag them into pointless drama.

What’s the easiest way of doing that? Take control over everyone else’s lives.

Alright, so that’s a lie. The easiest way of being at peace is being on their own, and Libras are perfectly happy to go that way, but the second better is to learn how to control everyone’s actions and manipulate them so that things go exactly their way.

How Libras do it depends entirely on the individual, of course.

Some Libras are perfectly happy, just shouting at everyone and criticizing their actions, claiming what they want is better.

Others are far more sly, and prefer to guilt-trip people into doing their bidding or straight-up bribe them.

Whatever method they use, know for certain that Libra is far more comfortable when they’re the ones behind the wheel, and they’re not afraid of running over others if it means taking charge.

This is one of the most common criticisms people have about Libra, and unfortunately, it happens to be true.

Libras are tremendously superficial and often fixate on material goods over experiences or time with their loved ones.

Even when they’re not out there, actively coveting things or spending their paycheck on things they definitely won’t use, they tend to turn their superficial eye onto others, judging them by their appearances without taking the time to know people.

Libras are the monarchs of snap judgments, and they’re not afraid of turning judgmental and criticizing other people based on what they think others should look and act like.

This whole superficial aspect of their personalities comes from their love of beauty, yes, but also from their need to control; They might be unable to control others, but they can at least criticize how they’re dressed.

Libra’s quest for balance is the driving force behind all of their actions and the cornerstone of both their negative and positive personality traits.

All Libras exhibit both good and bad traits to a certain degree, but immature, unhealthy Libras tend to lean more heavily into the negative because they’re so much desperate to cling to their peace.

Suffice it to say, a Libra that’s secure in their tranquility and their inner-balance is a Libra that’s aware of their shortcomings and is working hard to change them.

At their worst, their need for control pushes Libra to become manipulative, self-serving, and controlling, attempting to rule everyone else’s lives with an iron fist and criticizing those who don’t behave like Libra thinks they should.

From here, Libra’s superficial personalities and their proclivities for gossip come into focus, as they both work as a way for Libra to signal their values, praising the things they like and criticizing the things (and people they don’t).

As we mentioned, Libras aren’t particularly interested in using people’s secrets against them, but they tend towards idle gossip to show what they think of others.

Older Libras that have already reached a good enough balance know that, in order to get there, one needs to learn how to find inner peace despite everything around them.

Younger Libras need to learn that, rather than attempting to change their surroundings in hopes of finding peace.