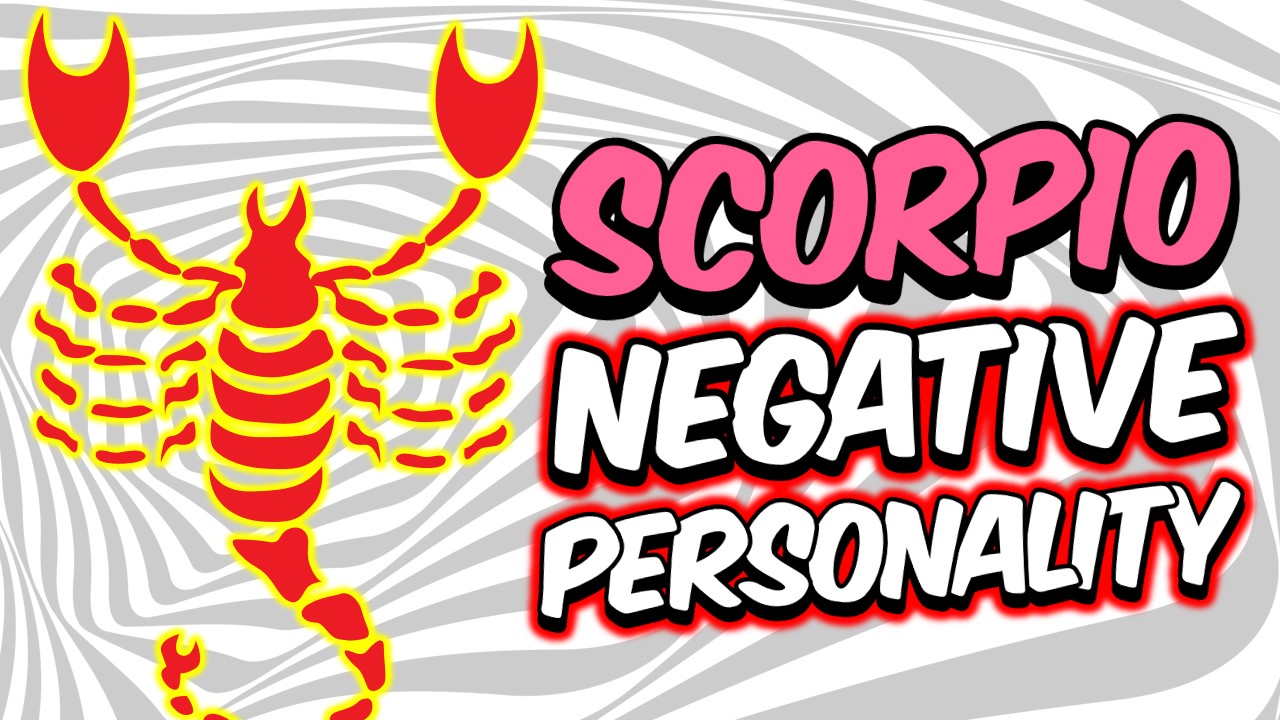 Is there such a thing as a controversial Zodiac sign?

If so, then Scorpio certainly fits the bill, as this thorny sign is always in people’s mouths, garnering both praise and criticism with little to no effort on their part.

And why shouldn’t they? Scorpio is a complicated sign that mixes both good and bad traits in equal measure.

They’re loyal, passionate, hard-workers, stubborn, ambitious, and they’re never afraid to go after what they want, always true to themselves and their goals regardless of what the world and others say about it.

They also have a reputation for manipulation and vengefulness, which has earned them a rather nasty reputation as a dark and untrustworthy sign.

Scorpio is a polarizing sign, with people either loving them or hating them, and while Scorpios can easily deal with this kind of conflict, and even thrive on it, we figured it would be interesting to see what some of Scorpio’s worst personality traits are, in order to see if their bad reputations are truly guaranteed.

Here’s what we found out:

Everyone knows Scorpios are resentful and vindictive, but few people are aware of just how far they’re willing to take things and how hard they find it to let things go.

You don’t even need to hurt them badly, or at all, really. If they feel wronged or even just inconvenienced, they’ll take it personally and will do what they can to make sure to punish you as they see fit.

Scorpios are go-getters who don’t hesitate to go after what they want, and that applies to seeking revenge, as they tend to get even almost immediately; and if they can’t, they’ll take the time to plan elaborate revenge.

Their inability to let things go and move on doesn’t limit itself to revenge and plotting, though; they also tend to beat themselves up over past mistakes and find it difficult to forget their own failings.

Scorpios just can’t seem to let go of the things that have hurt them in the past, and ironically, that keeps them from growing as people.

#2. They Have a Severe Case of Black and White Mentality.

They have a fairly straightforward approach to life, and either can’t see that things aren’t as simple as they look, or they refuse to acknowledge.

Nuance is their enemy, particularly when it comes to other people’s actions. If someone hurts them on accident, they don’t see the ‘on accident’ part, and simply assume the other person did it on purpose.

The same applies when someone’s actions didn’t take them into consideration, when someone’s choices go against what Scorpio believes is best for them, or any other situation remotely related to Scorpio.

They care about the end results, not the reasoning that led to them, and while this straightforwardness certainly helps them in their professional life, it really complicates interpersonal relationships.

Because of their apparent inability to understand the nuances of life, it’s no wonder that they have so much trouble letting go and seek revenge so readily. Anything that feels like a personal attack is a personal attack to Scorpio, and when attacked, they’ll defend themselves.

#3. They’re Rigid As They Come

Scorpios aren’t really known for their stubbornness, but they’re one of the most stubborn people out there, and this shows in just about every aspect of their life.

The previously discussed black and white mentality? Just another aspect of their rigid approach to life, where things are what they are and shouldn’t be changed or analyzed too deeply.

This rigidity and unwillingness to change isn’t entirely negative. After all, you can rest assured that Scorpios will always act as themselves, refusing to change for others despite peer pressure and being true to themselves every day of their life.

However, as with anything else in life, there’s such thing as taking this rigidity too far, and an unhealthy Scorpio can easily become narrow-minded, stubborn, and resistant to change if they let themselves fall too deeply into their comfort zones.

One of the most annoying things about Scorpio, and one that you’re bound to run into sooner rather than later, is that they’re incredibly hypocritical when it comes to dishing out criticism and generally being a pain in the ass.

Scorpios love to criticize others, and they’ll do so freely, not mincing words or not caring about other people’s opinions and feelings as long as they get to share their thoughts.

While this is annoying, it wouldn’t be so bad if Scorpio was willing to receive the same kind of criticisms they dole out, but that’s where they go from critical to hypocritical, as they simply can’t take what they dish out.

Criticizing a Scorpio is a death sentence, particularly if you dare to do it as aggressively as they criticize others. Scorpios will take it personally and will take what could very well be a growth opportunity as a personal attack, even if you offer constructive criticism.

This is another aspect of their rigid black and white worldview in action. When they criticize, they do it to ‘help’ others and provide critical commentary. When others criticize them, they do it out of jealously and a desire to tear them down.

Scorpios are passionate people that feel things very intensely. So strongly, in fact, that they often don’t know what to do with their emotions, which can blow-up on their faces and everyone else’s.

They’re also overthinkers who often spend entirely too much time thinking about other people’s actions and the reasoning behind them, even when they have no clue what they’re talking about.

This tendency grows when Scorpio is stressed, and Scorpio often stresses when it comes to romantic relationships and friendships when they’re not going perfectly, which means that they’ll overthink the reasons behind the problems in their relationships, which means they’ll blow everything out of proportion.

What’s worse, Scorpio’s rigid black and white mind mentality mean that they’ll often jump to the wrong conclusions, which in turn transforms them into jealous individuals that see cheating everywhere they go, and that feel the need to claim their partners and control their lives.

Can you say unhealthy relationships? We certainly can.

Most of Scorpio’s negative personality traits stem from their inability to see the world in shades of gray.

They favor simplistic explanations behind everything in their life and jump to conclusions at the slightest provocation, particularly when their feelings have been hurt.

This rigidity doesn’t only put them in a position where they often feel like they’re the only sane person in the world but also keeps them from moving on, as they’re incapable of letting go of mistakes, whether they were the ones that made them or it was someone else.

This results in an individual that sees the world as something much more straightforward than it is, and resents the world and other people when things don’t work out as easily as they expected.

As far as Scorpio is concerned, the world should work precisely as they think it should, and anything working against this is working against them, which means they need to be on the defensive, and they should always be ready to do what’s necessary to win.

After all, it’s easy to maintain this attack first, ask questions later policy when you’re convinced people are either with you or against you.

So, are Scorpios nasty reputations well-earned?

While it’s obvious Scorpio is not an easy person to deal with once you’ve pushed past their superficial charm, most of their negative traits are born from Scorpio’s rigid mentality.

Though it’s not guaranteed, this is the kind of thing that age and experience tends to fix, so Scorpios tend to get more tolerable with time.