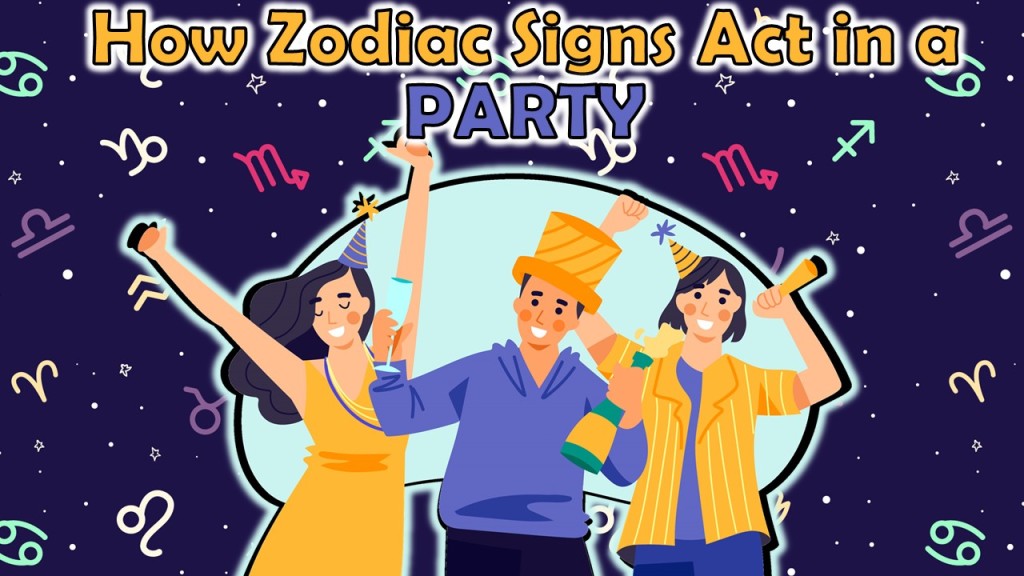 Some people live for parties; others can’t stand them.

Part of it is the company, what kind of music is played, and the overall energy of the room; Another part can be boiled down to personality: Some people are just not built for it.

Aries party like they do everything else in life: Without any measure of control.

They’ll dance, they’ll chat, they’ll drink, and if there’s any competition taking place, Aries will join out of principle.

Arieses have soo much energy there’s a good chance they’ll not only party after the night is over, but they’ll stick around to help with the clean-up as well.

If things get boring, Aries won’t hesitate to walk away to a better party, taking half of the attendants as well.

Though Taurus isn’t what you’d call “the life of the party,” they’re definitely up there as one of the best guests to invite to a party.

Polite, thoughtful, and orderly, Tauruses are likely to pitch in for the party, be it via food, drinks, or even money.

Not only that, but they’ll show up with a gift for the host, and if that wasn’t enough, there’s a good chance they’ll also help with the cleaning.

They might be out of place in a keg party, but they shine when it comes to more upscale celebrations.

Great conversationalists by nature, Geminis love parties in general, as it gives them the chance to mingle with new people and enjoy new experiences.

Geminis are capable fo putting people at ease and making themselves the center of attention, even if they don’t intend to.

They’re great for parties where people don’t know each other, as they’ll carry the conversations, but are better kept in check if you don’t want to be ignored at your party.

Cancers usually prefer small, private gatherings over huge parties, as they like making sure their guests are having a good time.

You’ll be hard-pressed to find a more dedicated host, as Cancer will go out of their way to make everyone comfortable.

As a guest, they too prefer to keep it small, sticking to private conversations between just a handful of parties.

Even as a guest, Cancers tend to be very solicitous, going for more drinks or appetizers for the host and the people they’re hanging out with.

An attention hog by nature, parties are essential to Leos in several ways.

Not only will Leos make sure they’re the best-dressed person at any party –including the host– but they’ll make sure their presence gets noticed.

They’ll make a big deal about the gifts, whether they’re receiving them or gifting them, and will make sure the limelight stays on them the entire time.

Virgos are animators. They like to make sure everyone’s having fun, even if it’s not their party.

They’ll check on others, make sure there’s enough food and drinks, convince people to dance, chat with strangers, etc.

If Virgo is sober, they’ll make sure their friends don’t do things they’ll regret.

If Virgo isn’t sober, they’ll at least make sure you have some laughs the next day.

Libras love to party, and they like it even more when people around them are having fun.

If someone looks like they’re not having a good time, Libra will be on them, making sure they don’t bring the party down.

Libra might even try to “cheer up” people who are having a perfectly good time, albeit quietly, making it a bit of a double-edged sword.

Libras have the habit of signing up for more than one party, so it’s not uncommon for them to vanish in the middle of a gathering.

They can go out and party the night away as readily as they can enjoy staying at home, having some beers with a friend or two.

It’s not that they’re antisocial, it’s that too many people can be exhausting to them, so they enjoy that kind of festivity only when they’re in the mood for it.

Sagittarians love to party, and they’re happy to join just about any party out there.

Raves, networking events, weddings, baptisms. It doesn’t matter, Sagittarius will be there, happy to take part in the festivities and to try anything at least once.

The thing they like the most about parties is the opportunity to meet new people, as Sagittarians have endless energy when it comes to new encounters.

Parties can be pretty awkward for Capricorns, so they tend to only to those they can’t wiggle out of.

Small gatherings are preferable for Capricorns, but they can always find a way to blend in with large crowds as well.

Give them a little booze and enough time to relax, and they’ll start enjoying themselves.

They might not transform into the life of the party, but I’ll least they start talking to others.

Aquarians love meeting new people, but they also value their peace and quiet, so how they do at a party depends a lot on their mood.

They might stick to a couple of trusted friends; they might transform into the DJ; they might end absorbed in a deep, philosophical conversation with the delivery guy…

No one knows what Aquarius will be at a party, least of all, Aquarius.

Known for their overindulgent attitude when it comes to parties, Pisces will make the best out of any gathering they’re invited to.

If it looks like it could be fun, they’re going to do it.